As we think of birds we usually of soft colorful, sometimes noisy, little birds that charm the morning sunrise and evening sunsets. However, stories and movies have managed to bring a darker side out of birds and it is not always in awe and wonder that the stories portray them. The Stymphalian Birds are one example of that. Probably best compared to stories of Hercules and darker played down versions like Alfred Hitchcock’s The Birds movie that made audiences think twice about their little chirping friend.

Since they are most known as the huge swarm of birds that they are we will look at them this way throughout the post. This is how they get their greatest powers anyways, in numbers. The Stymphalian Birds are a large swarm of birds that plagued the ancient lands of myth. They were supposedly set to one location and left to be but wolves drove them away. When they had to find a new place to nest is when the problems began. The Stymphalian Birds raged havoc on the lands and ate the farmer’s crops of their new found roost. Their droppings also turned fatal to the land and soil as they were poisonous and often regarded as similar to acid. Long story short, the farmers went to chase them off and were struck down by the piercing feathers the Stymphalian Birds raged down on them. The bodies were later discovered half way eaten with all the eyes plucked out.

According to legend the bird’s feathers that protect the birds were as sharp as metal blades that the Stymphalian Birds could send flying out at will. Unfortunate for the farmers in that tale they only thought of them as another flock ravaging the fields. Perhaps this was the begging of the other horrible aspect of the birds or perhaps it was something dormant. You see, the birds also have or developed a nasty desire for the taste of human flesh.

The birds were set in their polluted land and became a task of Hercules in some legends. The land was soured and turned into a bog from the Stymphalian Birds horrible nature and polluted droppings. When Hercules went to go disperse or kill the birds he himself could not reach their nesting grounds for the bog was to think and poisonous. He got help from some friends who created a large bronze rattler, or in some legends a “clapper,” and stood on the mountains working this tool until the birds finally left their nest.

One by one Hercules removed the birds from the sky with a sling (bow & arrow, or catapult also in legend) until their numbers were reduced to such a state that the remaining fled the land. However, that is the eerie fact of legend. Hercules did not kill them all. 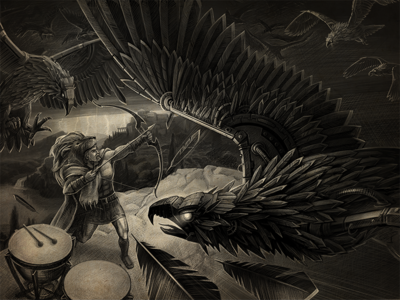 They fled to what many believe was an island in the middle of the Black Sea. Here, later in tales, Jason and his Argonauts encountered the beasts of the sky as well. Perhaps once again it was a trespass on the birds or perhaps it was once again their pure desire to dine on human flesh.

Either way in all the legends the Stymphalian Birds are never entirely killed off, only driven other places with their fierce flesh piercing feathers and toxic bird poop. You can only wonder where the legends have them nesting now. 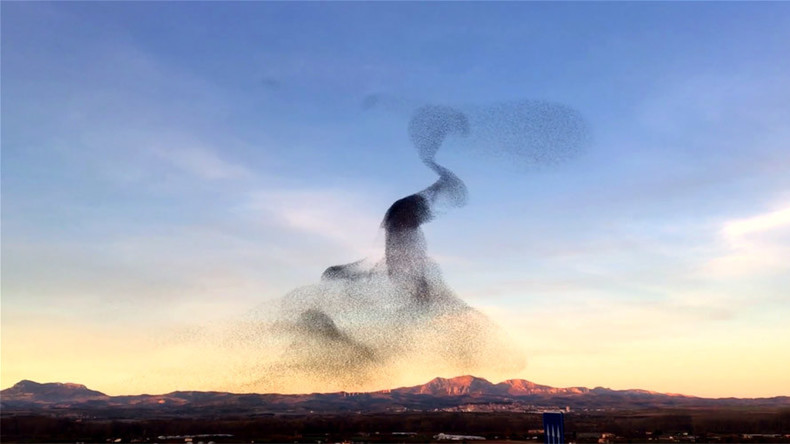 Birds of many shapes and forms and species. Probably most likely Ravens, Swans, Geese, Storks, Cranes, or even a Raptor in some form. For all the legends of difference they could be any bird species. They have feathers that are capable of piercing through flesh and perhaps even armor. Some tales say the feathers were actually made of metal and the birds were armored with the same metallic protection as well. They have toxic, acidic, or just poisonous droppings that ruin the land around their roost. They are most strong when together in a large flock. They have an irresistible desire for human flesh but like to leave enough of the ravished corpses behind perhaps as some sort of symbolic message or warning. DO NOT DISTURB my nesting grounds.