Back to the mythical creatures, at least for now, and this time it is another lesser known creature by the name of the Simurgh. Another creature of mythical legends that roams that skies and this one seems to be pretty much all good and granting wise words of wisdom. A massive bird as are most of them in legends. Said to be the size of 30 birds, which doesn’t help much for defining an actual size, but there is one thing. It can be big enough to carry off a whale or elephant. This leads me to believe it is similar in size to the Thunderbird. Both share a similar trait when the size was mentioned.

The most popular story is one of a man named Zal. An albino born to a Persian king who was abandoned by his father to die for exposure. The Simurgh raised Zal and when Zal reached adulthood his king-father came looking for him for stories have reached the king. When the Zal was discovered his father was remorseful and they made amends. However. The Simurgh told Zal to take a plume from the bird and if ever needed to light it and the bird would come. Sure enough when Zal’s wife’s pregnancy almost led to doom for both the mother and child, Zal lit the plume.

The Simurgh appeared and advised the couple what to do and what herbs to take in order to spare both the wife and the unborn child. That child would become a legend in himself one day throughout Persia. His name was Rustam and this legend can be read in The Shahnemeh.

Some other stories depict the bird as being a spreader of life. Casting its gaze upon the land as it soars and flaps it wings, spreading seeds and creating all plant life we know today.

Some stories speak more of the bird’s solitary life among the Elburz Mountains or the Kef. Here it is sought out for wisdom or the powers of healing. One story tells of many men venturing to find the bird but only the 30 strongest of them made it to the Simurgh. Those 30 became the Simurgh which was a divine end to their story from their perspective in those times and culture. 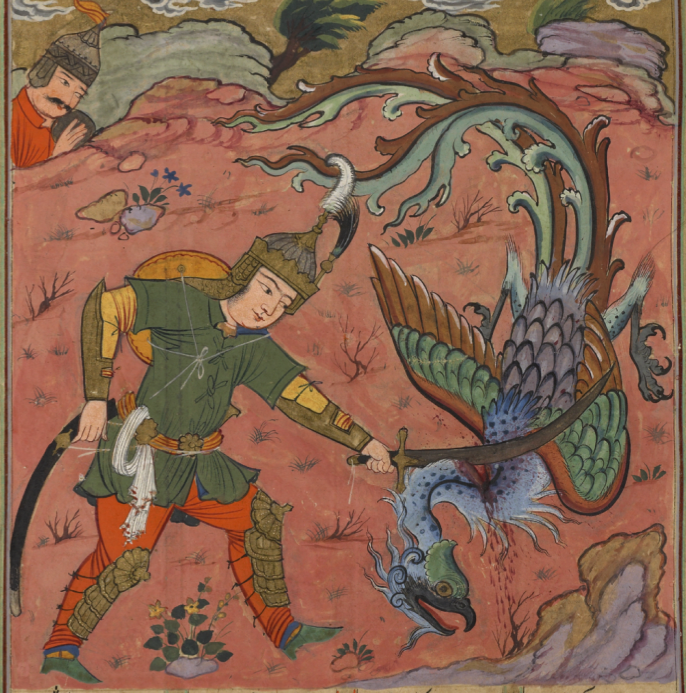 30 Birds in size but capable of lifting a whale or elephant. Probably lives near or around Persia but stated nest sites are the Elburz Mountains or the Kef. Has been reported to have superior wisdom and possible healing powers. Some tales state that it can live as long as 1,700 years before destroying itself. Often a dog-like head on the body of a massive bird, lion’s claws and a colorful tail. Either a peacocks tail or colorful and displayed in a similar way.