So this blog actually covers two mythical creatures, Scylla & Charybdis. That is because they kind for work together if you know the tale and also because they are considered mythical monsters of the sea. This may be a little confusing since one resides on the land in a cave but the treachery she reeks on those who cross her path are usually seafarers.

Scylla & Charybdis are two mythical creatures that haunt seafarers in the Strait of Messina. Both were at one time beautiful women (Charybdis the daughter of a god) that were cursed to become creatures that terrorize sailors.

The strait is haunted my rocky shores and whirlpools from missing currents. Of course tales would be told that explain these dangerous situations to sailors. Also to strike fear in the hearts of any new seafarer who happened to sail the strait.

The tales of the mythical creatures Scylla and Charybdis date back to the times of Ulysses (Latin name for Odysseus) and the Argonauts. The tale of each mythical creature’s origins is individual but the tale of after they were transformed has them working together.

Pretty much is a ship happened to sail to close to the rocky shores then Scylla would be able to grab sailors from the passing ships and feast on them. Although she did also eat her share of fish to satisfy her hunger, she couldn’t help her cannibalistic desires of the flesh of humans.

If you sailed to far from shore trying to stay well clear of Scylla then unfortunately you would encounter Charybdis.

Charybdis is a little bit more of an unknown creature. All we know for sure is her reported origins and the dangerous whirlpools she sends through the waters of the strait that pull down ships that venture to close.

Scylla was once a beautiful young human woman. She was sought after by Poseidon and when Amphitrite became jealous she poured a poison into the fountain where Scylla bathed. Upon bathing Scylla found her legs replaced by the legs of multiple hounds. And if that wasn’t enough she also grew five more heads. Her beautiful nature left her that day and so did her lovely attitude.

She must have grown in size as well because the tales of Scylla do have her grabbing sailors off ships passing by with her huge mouths with jagged sharp fangs on her multiple heads.

Lives in the Messina Strait on the land and in a cave. However she only haunts the shorelines for the life much longer than regular mortal. She is rather large with long necks extending form her womanly upper body that are long enough and strong enough to seize sailors from their ships. She still possesses an odd beauty in the 6 faces on the 6 heads she now has with three rows of teeth. It is said of the legs of hounds she walks upon is actually 12 with one lashing tale extending from behind. 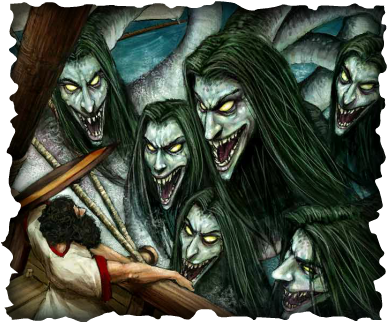 Charybdis was the daughter of Poseidon and Gaia. In a tale by Homer she from Hercules and was then punished by a lightning rod sent from Zeus. This sent her down into the depths of the strait never to be seen again. At all. All is known is that she manifests three times a day. This is what causes the whirlpools. She regurgitates her previous meals into the sea and sucks in new sea water.

This part is unknown, although at one point we knew she was a beautiful daughter of the gods. The only things of her that can be seen is the whirlpool she creates because she resides so far down in the depths of the Strait of Messina. Since she was, at one point, the daughter of two gods and cursed by a god she is most likely immortal. Creating horrible suctions for whirling water to pull down entire sailing vessels for all of eternity. 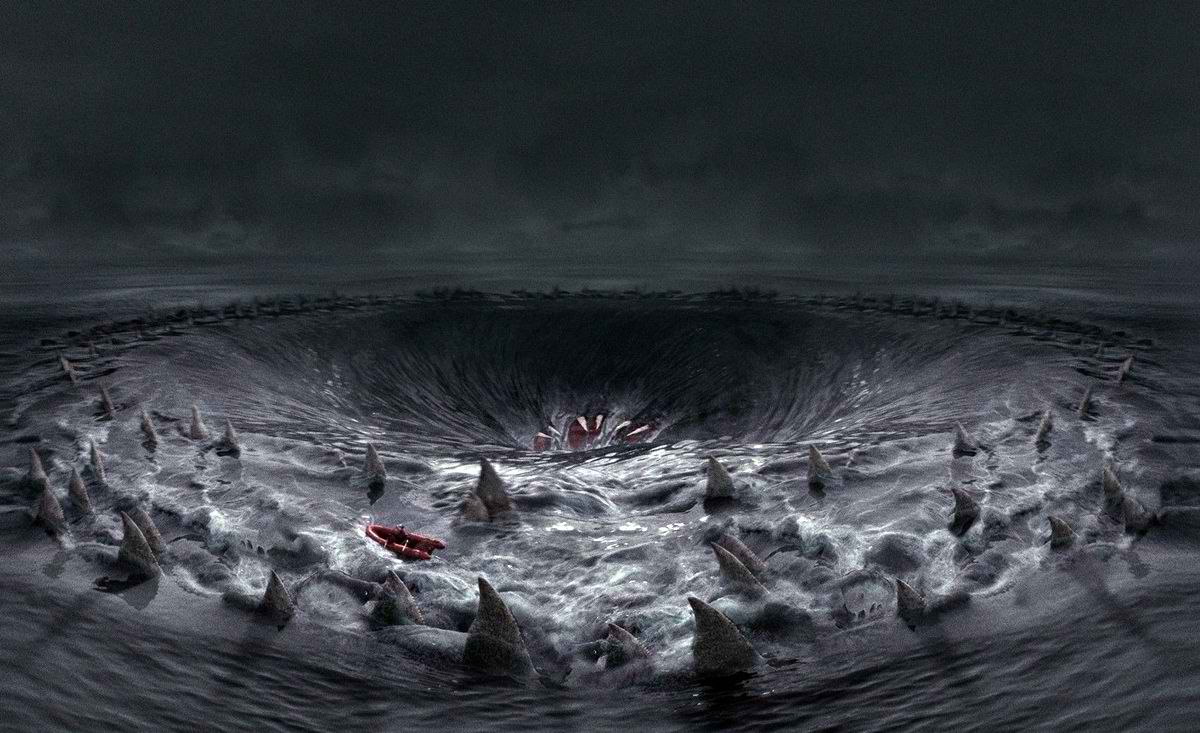